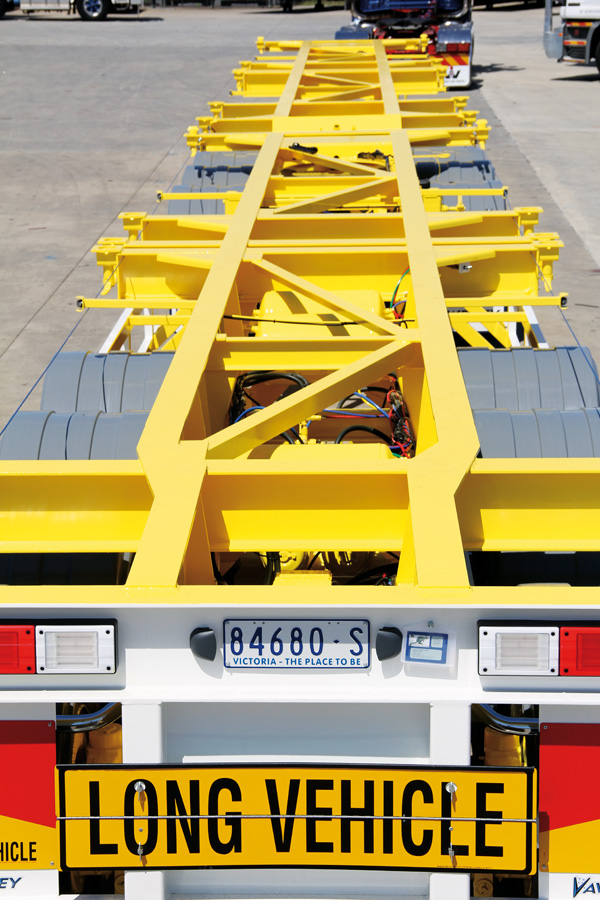 As Australia’s commercial road transport market is becoming more and more competitive, the old ‘less is more’ approach can sometimes make all the difference. when Qube Logistics went in search for new equipment, for instance, they found that Vawdrey’s super B-double could offer more payload and less running cost at the same time.

Located in Victoria, Qube Logistics is a division of Qube – one of the country’s leading integrated logistics providers, whose national network includes all key ports and metropolitan and regional rail services, as well as intermodal terminals and specialised projects around Australia. Over the past four years, Qube Logistics has continually developed and expanded a fleet of more than 650 prime movers and over 1100 trailers to cart general freight on a 24/7 schedule. “At Qube Logistics, we are constantly expanding and have evolved considerably in the last 10 years,” says Fleet Manager John Allen, who mainly handles the container section within the brand’s waterfront operations. “Our fleet is increasing on a daily basis because we are in a period of accelerated growth, so the numbers today could be much different tomorrow. In terms of purchasing, we will grow our fleet depending on the supply and demand of the market.”

In a move to further enhance the brand’s performance, Qube Logistics recently took delivery of ten 40’/40’ Super B-double combinations built by Dandenong-based trailer expert Vawdrey. Five are to be used in Sydney, while the other half is in operation around Melbourne’s Docklands district. “We’ve been dealing with Vawdrey for the last 10 years,” says John. “They have understood how to combine both performance and reliability, and that’s what we need for this kind of work.”

According to John, the Vawdrey Super B series is not only custom-built according to Qube’s internal standards, but also takes into account the VicRoads’ high-performance guideline. “Since the Super B-doubles mainly operate in the Docklands precinct, where VicRoads only permits heavy road combinations that operate with a 109 tonne limit and within a five-kilometre radius, such precision is crucial detail,” he says. “We’ve been involved into the build process from the first design draft to the very last weld, so we know it’s a waterproof design.” 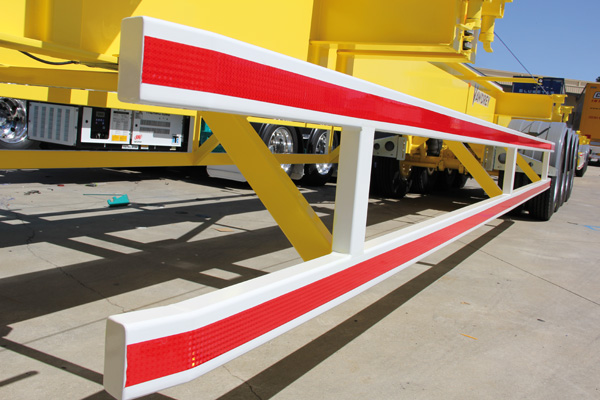 In addition to the immense weight capacity, each Super B-double is fitted with an electronic braking system (EBS), side under run protection, rear steerable axles as well as a quad/quad suspension system, which is a VicRoads prerequisite, according to John. “The quad/quad axle and suspension system is a requirement within the High Productivity Freight order diflucan online Vehicle (HPFV) program; and our vehicles are the only ones that qualify on the Melbourne waterfront,” he says. “They work under the IAP and PBS banner that is controlled by VicRoads.

“The trailers need to be quad/quad fitted in order to achieve the weight when driving from the city to suburban areas like the major industrial hubs in Laverton and Somerton. Bulk movement is the goal we want to achieve, and that’s what VicRoads are trying to work towards with the HPFV program.”

According to John, however, complying with those regulations was not the only issue Qube Logistics had to address when it decided on the super-sized Vawdrey design. “We had several issues we needed to iron out from our previous trailers. Those niggling factors included air operating valves for the height regulation,” he explains. “When the trailers were loaded, they weren’t pumping the air quick enough, so containers would load on and the drivers would leave before the valves had completed the lift. This could ultimately wear out our components, so we needed to purchase high speed air valves just to be able to get that air in more efficiently.”

Now, armed with 10 more of Vawdrey’s Super B’s, John acknowledges that Qube Logistics may have found the right trailer to optimise what he calls ‘impact loading’ – allowing the company to cart more freight using fewer vehicles, thereby lessening congestions. “What makes Vawdrey trailers so efficient is the design’s core strength. In the container industry, we measure a trailer upon its ability to endure what we call impact loading,” he points out. “When you have a standard B-double, you load goods pallet by pallet which gradually increases weight with each loaded pallet. But in a waterfront situation, a straddle comes along with a 30-tonne container and the load goes straight onto the trailer in one hit. So the trailer must have enough strength to sustain that type of impact loading.”

John adds, “It is the same scenario on the return trip, for instance when the trailers are offloading, the forklifts or straddles will lift the container off and all of a sudden that 30 tonne weight disappears. That weight fluctuation puts a lot of stress on your airbags and suspension, so the trailer needs to be robust in that regard. We now feel that these 40’/40’ super B-doubles allow us to cut travel time, vehicle usage and fuel consumption, while increasing our payload. That kind of volume productivity is invaluable in a business that operates 24/7.”