Transporting international airfreight throughout the country is a highly specialised job – especially if all major Australian airports are involved. For Jets Transport Express (JTE), there is no margin for error, which is why it enlisted the help of Vawdrey’s new auto mezzanine deck technology to guarantee a flawless track record.

Melbourne-based Jets Transport Express is one of Australia’s leading ‘road feeder’ services for the global air cargo industry. The company’s national network –covering Sydney, Melbourne, Brisbane, Coolangatta, Perth and Adelaide – operates seven days a week to ensure that international airfreight does not stay grounded once a plane has landed somewhere in Australia.

“For example, if you have international airfreight coming into Sydney and it has to be sent up to Perth, but the cargo is too big to fit onto a standard passenger aircraft, we transport it by road,” explains JTE’s newly promoted National Manager, Rod Braganza. “We are the road extension of all airlines that cannot carry international freight to every Australian airport.” 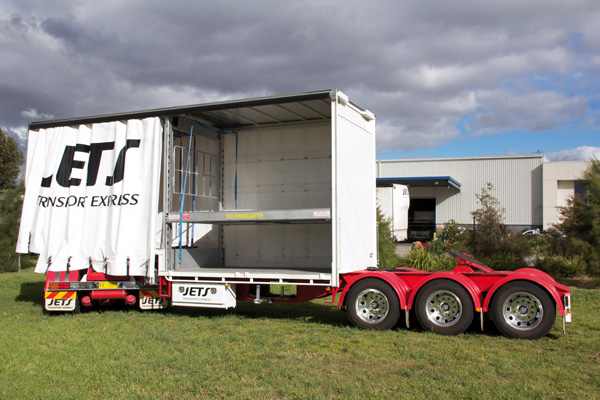 Recently, the company was in charge of transporting cargo for the Melbourne Grand Prix, carting the sensitive equipment from Sydney down to Melbourne and back up to New South Wales’ capital. “What we do is no everyday job,” says Rod. “You need to have the best people and equipment to make sure the supply chain won’t be interrupted.”

Established in 1989 and purchased by Qantas Freight Enterprises in May 2008, JTE can boast a fleet of 35 uniquely specced trailers, mostly in semi or B-double configuration. “The majority of the equipment we use is specifically designed for carrying Unit Load Devices (ULD), which are the common measure in the airfreight game. They usually come in the shape of pallets or containers and carry large quantities of luggage bundled into one compact unit.”

To handle the sensitive, valuable and often awkwardly shaped airfreight, JTE is relying on roller bed conveyors that are typically fitted to the rear trailer in a B-double combination. According to Rod, the JTE fleet is also equipped with air ride suspension, lockable rear doors and retractable lift decks as standard, and has a maximum turnaround time of five years.

Driven by a Razor unit, Vawdrey’s automatic solution enables the driver to raise or lower the mezzanine deck via the touch of a button – eliminating the risk of climbing onto the platform to relocate the corner saddles whilst a forklift balances the deck in mid-air.

“Most companies will not manually lift decks at the venue anymore,” says Justin. “We have experienced numerous occasions where a B-double is unloaded, but the driver has to leave the yard and get the decks adjusted before the trailer buy fluconazole online will be loaded again. By the time he returns, he has not only lost an hour or two – he is also back waiting in the queue to be loaded.”

“As a result, any new equipment we introduce into our fleet is evaluated against its ability to satisfy an identified OH&S requirement as well as deliver a certain productivity gain, and the Vawdrey solution has ticked all the boxes,” adds Rod. “Air-operated locking pins now engage the deck into position without the need of human intervention, and we think that’s a game-changing feature in regard to both safety and efficiency.

“Since the trailers went into operation over a month ago, we have seen two main benefits occur,” he explains. “One has been the operational efficiency, because you only require one person to adjust the floor, as opposed to a couple, so we have systematically reduced the chance of someone getting hurt. Secondly, the new trailers basically double our capacity because we can now utilise the entire volume of the A-trailer.” 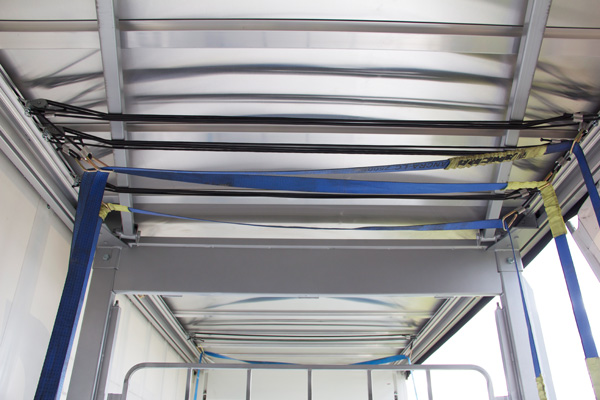 In addition, the new Vawdrey design also has bungee straps fixed to the roof, eliminating the need to throw straps over the cargo or climb on top of the cargo to manually secure the load. “We didn’t hesitate to implement such a feature,” says Rod. “If a new technology is able to both improve OH&S and also raise operational efficiency, we will look into it.”

According to Rod, JTE’s number one priority is to integrate safety, security and quality into every element of the business. “We are committed to ensuring that all of our activities are conducted in accordance with the highest government regulations and industry standards,” he says. “That’s why we’ve been using Vawdrey for more than a decade. Their professionalism and build quality are legendary and we can always rely on their vast, nationwide service network.”

In that sense, Vawdrey has become a viable cornerstone of JTE’s ambitious future plan. “All of this is within the big picture of becoming the leading force in both efficiency and safety,” says Rod. “In the future, we want to continually increase the number of B-doubles in our fleet. Traditionally we only used them on the west coast, particularly on the Melbourne to Perth route, but now we’ll have more of them on the Melbourne to Sydney and Sydney to Brisbane/Coolangatta leg too.”

On that account, Vawdrey’s new automated mezzanine floor  has the potential to boost JTE’s flexibility in the long term. “Due to the nature of our business we will always have a need for roller-operated floors on our B-trailers because we transport a mixture of ULDs and loose cargo, but there is a real opportunity for the mezzanine solution to be used all around the country. With Vawdrey’s help we can now carry the loose cargo on the A-trailer and the aircraft units on the rear.”