There is more than one parallel between the nation’s largest privately owned trailer manufacturing company, Vawdrey Australia, and Damorange Refrigerated Transport (DRT), a leading force in Victoria’s produce cartage scene.

To begin with, both were founded in 1974 and quickly rose to national fame, and both take pride in a firm commitment to service excellence. But it doesn’t stop there. Both businesses have managed to remain independent and family owned, and both of them share a deep understanding of the transport trade that has been passed on from generation to generation. And, finally, both of them rely heavily on innovation as the fuel driving corporate growth.

Having so much in common – including a joint interest in pushing the limits of modern trailer design – it is no surprise the two father-and-son-businesses have been aligned for more than half a decade, with Vawdrey actively supporting Damorange’s quest to maximise fleet productivity. 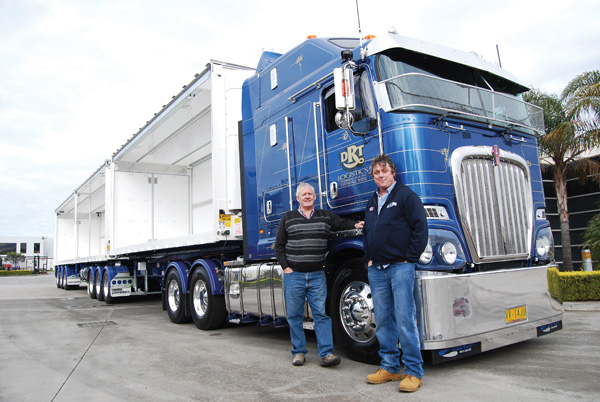 “Vawdrey and Damorange just seem to be a natural fit,” says Managing Director Scott Splatt, who is managing the company in unison with his father, Shane. “Both our businesses have come a long way from humble beginnings and both understand the unique characteristics of the Australian market. But we also both know that progress is key to surviving in an industry as competitive as commercial road transport.”

With Vawdrey having spent the last year or so evolving into a nationally acclaimed Performance Based Standards (PBS) expert, it was only logical for Scott to tap into the supplier’s new skillset and join the high performance vehicle (HPV) movement – marked by the arrival of the two new 28-pallet freezer vans in June.

“We’ve developed a relationship with the team at Vawdrey where they know exactly what we require as a business, so if they recommend a certain direction we feel confident in following them down that path,” he says. “As a fleet, it’s important for us to realise our suppliers’ full potential and make the most of it. So when Vawdrey started moving into the PBS field, we knew we wanted to be part of the process.”

According to Scott, DRT is aiming for an annual buy diflucan online pharmacy growth rate of around 15 per cent, so every new pathway to adding efficiency is worth exploring. But the decision to give PBS a go is particularly important to him: “A 28-pallet semi would’ve been unthinkable a while ago, but with PBS becoming more and more sophisticated, it’s now a reality. And since the vehicles will be going up and down the same route, we can sacrifice a bit of geographic flexibility for more payload.”

Built to shuttle between Melbourne and Sydney carrying mushrooms and tomatoes, Damorange’s first PBS units have been fully pre-approved to ensure they can be put straight into service. “While we traditionally use B-doubles to transport fresh produce, the nimble 20-metre units are a great alternative for us as we only have to register one trailer each and still only fall six pallets short. In the agriculture industry, where the amount of produce we cart varies every day, that’s something we can work around.”

Competing in an industry where 24 pallets still is the standard volume for a semi, Vawdrey’s new PBS van can boast a 17 per cent capacity advantage compared to a regular van. “If you consider that the industry has only just breached the 26-pallet barrier, it’s a real milestone,” says Scott – adding that he paired each trailer with a short wheelbase Kenworth K200 to stay within the legal limit.

“I’m looking forward to seeing how the combination of a short wheelbase truck with an extra-long trailer will prove itself down the track, but I have a good feeling about it,” he says. “If it does work out, it might be a real alternative for us given the potential savings in registration fees.”

The two new vans – as well as two all-new refrigerated Wingliner units – are joining a fleet of 70 prime movers and 130 conventional trailers in a variety of shapes and sizes, Scott adds, so there could be a real business case for PBS in the Damorange organisation down the line. “I think Vawdrey is the best trailer manufacturing company in Australia, so it’s the ideal partner to help us explore what PBS is all about. They’ve made it nice and simple to get involved, with minimum fuss and bureaucracy, so we’re off to a good start.”