Skip to content
Home
|
Off to an Ice start

Having Just passed the ‘ten years in business’ mark, Rowan’s Transport has found its feet in general freight and is now embarking into refrigerated transport with a new, PBS-approved Iceliner from Vawdrey Australia.

Rowan’s Transport has an inception story that would likely sound familiar to many in the road transport industry. Joel Rowan’s future in transport was sealed the moment he bought his first truck and grain tipper in 2006 to deliver grain for the family farm in Coleambally, New South Wales.

“Things were going alright there until there was a big drought and I had to change the plan to keep the truck going,” Joel recalls. “I bought a curtain-sider and started transporting produce, then it was a short time before I began working for the supermarkets. One trailer turned to two, then three, and the rest is history.”

The Rowan’s Transport fleet has now reached a total of 23 trailers, including the company’s latest arrival, a 26-pallet Iceliner from Vawdrey Australia that was delivered in early July. The refrigerated trailer was specifically purchased to meet a new contract that further expands Rowan’s Transport offering, adding frozen goods to the list of services provided. 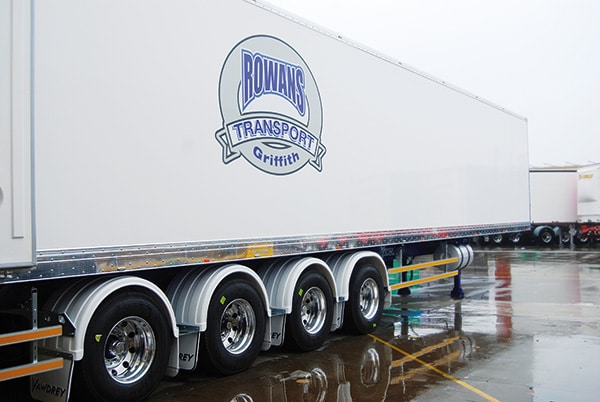 For Joel, Vawdrey’s ability to purpose-build a trailer to his requirements was a major influencer, as he had some specific weight requirements. “The perishable goods we need to cart for the new contracts are a substantial weight, so we needed to find a trailer solution that could handle at least a tonne per pallet space,” Joel says. “With refrigerated vans that was apparently hard to do, but with the help of the team at Vawdrey Australia, we found a solution that can do just that.”

Joel says the resulting Iceliner has far superior weight distribution thanks to the quad-axle set-up, which he says was only possible under the high productivity Performance-Based Standards (PBS) scheme. “Thanks to the quad-axles, we can run a higher allowable weight than in the past, which is further increased by moving the steer axle to the front of the group,” Joel says. “This was our first ever PBS trailer and we really appreciated the help from Vawdrey, which helped us throughout the approval process.”

According to Vawdrey National Sales Director, Paul Vawdrey, that ability to walk its customers through the PBS process is what makes the trailer builder a leader in the high productivity scheme, something the company buy diflucan fluconazole identified as an important growth area in 2012.

“We’ve invested heavily into PBS as we see it as an important asset to commercial road transport,” Paul says. “More and more operators want to take advantage of the increased productivity, efficiency and payloads it offers, and we have the ability to help them find those gains.”

Although many a PBS-approved combination has restricted road access when compared to a standard combination, the Iceliner actually allows Rowan’s Transport to access a better route than if it used a standard B-double. “The Blue Mountains have a newly approved PBS route for single trailers, but do not allow B-doubles due to the curvature of the roads,” Joel says. “We save around 120km per trip than the alternative – and the Iceliner’s capacity is cents per kilometre more effective on this route.”

To help keep the cargo at the desired temperature, the Iceliner features 40mm fibreglass/foam sidewall panels that can hold temperatures as low as -28oC. The specified floor is Vawdrey’s standard distribution knurled aluminium floor, a non-slip surface that not only improves airflow, but also reduces the risk of injury from wet or slippery floors.

“A full-length, lightweight steel chassis complete with galvanised crossmembers and rear frame gives the trailer the added strength and durability that is necessary for heavy-duty applications across different roads and highways, all without affecting the payload,” explains Paul – adding that Rowan’s also benefits from the Iceliner’s reinforced interior.

“The Iceliner comes fitted with an aluminium rub rail fully welded to the floor and new exterior side rails top and bottom, which strengthen the integrity of the walls and are fully laminated to the floor, roof and front wall. Not only are the rails stronger, but lighter too,” Paul describes. “Compared to the old rails, these aluminium ones take four to five kilograms per metre off the overall tare weight.”

Though the story of Rowan’s Transport shares much with countless other Australian transport businesses, Joel says his willingness to explore new work when faced with the drought in his early years is what set the company apart, and helped it succeed. “We’re not afraid to try something new, if it is backed by reason and solid information,” says Joel. “It’s the same attitude that brought us to our first Vawdrey Iceliner, which we think will help take the company to the next level.”