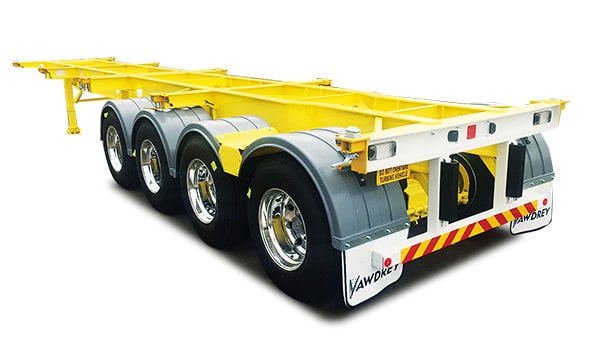 To facilitate regulated increases in road network access for larger heavy vehicle combinations, the High Productivity Freight Vehicle (HPFV) Performance-Based Standards (PBS) scheme in Victoria, and similar programs in other states and territories, were introduced in the interests of safety and efficiency (see breakout box).

Qube Logistics has been at the forefront of PBS and the HPFV movement since the company’s inception in 2012 (see breakout box), streamlining bulk container haulage between ports, depots and other locations by investing in quality heavy vehicle combinations from Vawdrey Australiaw that satisfy PBS specifications.

With over 40-years of experience in the industry, Qube Logistics Fleet Manager, John Allen, says that the advantages of PBS-approved equipment is ten-fold over standard, minimising vehicle footprint on the road with fewer vehicles hauling bigger payloads.

“Qube Logistics is all about safety and productivity,” he says. “The national fleet includes 30 A-doubles built by Vawdrey Australia, operating throughout Sydney, Brisbane, Adelaide and Melbourne for container transportation and other bulk-load freight tasks.”

John says the initial Super B-double PBS design approval process took a few years to complete, circa 2008, between consultations with the National Heavy Vehicle Regulator (NHVR) to determine the right spec’d gear to optimise the combinations.

“The PBS process has improved dramatically in the past decade,” John says. “Trailer production and delivery is much smoother now that Vawdrey manages the design and approval process with the NHVR and other relevant parties.

“I used to work almost exclusively on the PBS applications, and due to other inefficiencies in the process, it took a relatively long time to get the required approvals and permits to invest in optimised transport equipment.”

John says that he can focus on his core responsibilities, entrusting Vawdrey to take lead on PBS projects, treating the trailer builder as a “one-stop shop”, where the trailers it receives are now built-to-spec, which speeds everything up.

“The company can’t comply with safety without the right equipment,” says John. “Qube Logistics will continue to invest in PBS transport equipment, and support the HPFV movement because, ultimately, it should be mandatory for the industry as a whole to comply with these standards that promote significant performance gains, but more importantly, better safety for the nation’s road transport operators.”