Service and presentation is key for Hobart-based business, Stateline Freight. The latest trailers to join the fleet, two 24-pallet customised FRP vans manufactured by Vawdrey, not only look the part but are exceeding expectations, too.

Started in 1993 by brothers Paul and Gerard Ryan, Stateline Freight prepares to celebrate its 25th anniversary this coming July. From humble beginnings with just one van and a truck, the business has grown in leaps and bounds. “It was the old cliché, all Gerard and I ever wanted was to be able to go out and do our own thing,” recalls Paul. “We started out doing deliveries for Australia Post and from there we grew. We were awarded a substantial contract in Hobart in 1996 and by mid-1997 had expanded to state-wide operations for this particular customer. At that stage, we had eight vehicles.” 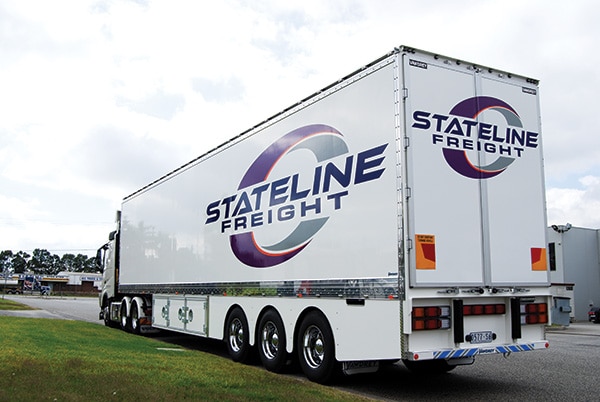 Fast-forward to today, and Stateline Freight’s fleet has grown to 43 including a mix of vans, rigids and semi-trailers; and the company operates throughout Tasmania, Victoria and Sydney, employing 52 staff. The company also provides 3PL services to several national healthcare companies along with airfreight six nights a week between Melbourne and Tasmania.

The new Vawdrey trailers represent another milestone for Stateline Freight, as these are the first semi-trailers to join the immaculately maintained fleet. Towed by a Volvo FH540 and a Volvo FH700 Globetrotter, the latest additions were delivered in January and put straight to work. They were purchased to service the needs of a new contract that brought about the need for larger trailers. Both FRP vans were put straight to work, travelling from Hobart, before boarding a ship to cross Bass Straight and making their way up to Sydney, then back again every week.

“I first spoke to Jim Reeves from Vawdrey back in 2013, and we maintained contact over the next five or so years. When we gained this new contract, we decided to go through Vawdrey,” says Paul. “Vawdrey has been extremely good to deal with. They always deliver what they promise and Jim is a man of his word. If he says he is going to do something, he does it. Jim understands what we are trying to do and is in sync with what we need.”

Both trailers are fitted with a double bar adjustable loader system that allows for the double stacking of sensitive freight, without the risk of damage. Belly boxes allow for additional freight storage and better wind deflection. The side skirts fitted over the tri-axle also aid with wind deflection, for better aerodynamics and they add to the aesthetics of the trailers, too.

Paul reveals that he takes a great amount of pride in the presentation of his fleet; which is modern and very well looked after.

“Presentation is everything in our field,” adds Paul. “People expect our staff and vehicles to look the part, so presentation is extremely important to us. We do not handle much in the way of general freight and try to stick to our niche market. We have a one driver per vehicle scenario, so this encourages our drivers to take pride in their vehicles. Typically, we don’t keep anything for longer than four years and we work with premium manufacturers among the likes of Vawdrey, Volvo and Mercedes.”

And to ensure the new Vawdrey trailers look the part day or night, they have both been fitted with plenty of lights. “There are 25 lights along the side at the top, and the same along the bottom, that’s 100 lights all up on both sides, as well as additional lights added to the rear. It is a little over the top but very eye-catching of a night,” Paul says.

Other features include aluminium super chrome rims by JOST, Fuwa K-Hitch E-leg landing legs, SAF-Holland Intradrum axles and suspension, and Wabco EBS braking fitted with Smartboard which allows the driver to view the axles weights from the dash of the prime mover.

Impressed by the quality of the new trailers and the service offered by Vawdrey, Stateline Freight has another 22-pallet FRP van due to join the fleet in May. It will be used to service Melbourne metro operations. “And we are looking to order more trailers in the near future,” Paul says. “Looking ahead, our plan is grow the business with our current clients, while maintaining service levels. We are also looking to increase the size of the business where it’s profitable to do so.”