Toll has purchased two new Vawdrey A-double prairie wagon combinations to service its BlueScope Steel operations in Victoria. As the first Performance-Based Standards trailers to join the fleet, they will enhance productivity through significant payload gains.

Coordinating the transportation of such high volumes of steel around the country is a mammoth task that requires high levels of efficiency and consistency. BlueScope contracts Toll to manage and coordinate its logistics operations across its national supply chain. This partnership involves Toll managers based at BlueScope production sites in Port Kembla and Hastings in Victoria to ensure transport operations are carried out to the highest service standard.

Business Manager for BlueScope in Hastings, David Hastings, joined Toll 12 years ago. He worked with trailer manufacturer, Vawdrey, to develop a solution that would offer increased efficiency in the company’s bulk steel coil operations. This resulted in the purchase of two Vawdrey 30 metre A-double prairie wagon combinations running under Performance-Based Standards (PBS).

“Toll has been working with Vawdrey for several years and the majority of the BlueScope fleet in Victoria and New South Wales is made up of Vawdrey trailers. Vawdrey worked closely with us to design the prairie wagon trailers we needed. Reliability, lighter tare weight and greater payload have all come into it,” explains David. 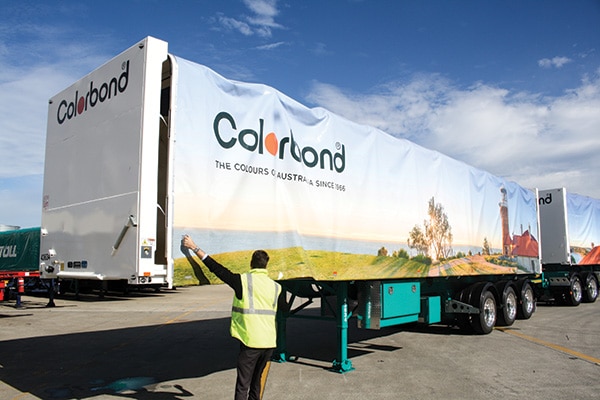 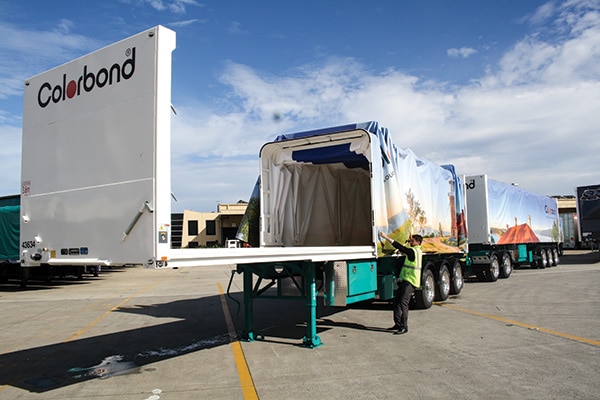 The prairie wagon design of Toll’s latest A-doubles means that the entire side and roof of the trailer can be rolled back, offering greater access when loading and unloading. “The whole idea of using prairie wagons is to allow clear floor access so the trailers can be loaded and unloaded by crane. We load out of two warehouses – one has vertical coils that can be loaded by forklift, but the other has horizontal coils which need to be loaded by crane. We don’t use flat tops because we are transporting a critical dry product. The entire fleet is made up of prairie wagons,” David adds.

Vawdrey has incorporated different locking mechanisms into the design of the prairie wagon curtain to simplify and speed up the process of opening and closing them. The trailers also feature a lightweight chassis construction and use lightweight Hendrickson suspension, which add to the savings in overall tare weight.

The new trailer combinations will be based in Hastings to service freight movements in the Melbourne basin. Previously, B-doubles were used to service this task, however the new A-doubles will offer increased capabilities and higher payloads, representing gains of 8-10 tonne per trip. These are the first combinations in the BlueScope fleet that will operate under PBS.

“And we won’t need to make any variations to our current routes,” says David. “Our fleet predominantly operate five days a week. We double shift our fleet, so have flexibility to run at night. We also have plans to trial the A-doubles on routes on the second shift too.”

David says that these trailers are a perfect fit for the company’s operations as there are sometimes greater variances in coil weights to optimise utilisation. With the new A-double combinations about to hit the road, David says he is impressed with the end product. “This project started out as a simple pencil drawing and it’s exciting to see it come to fruition,” reveals David. “Our relationship with Vawdrey isn’t just in the BlueScope division, but extends to all parts of the Toll business. In any business, when you are looking for suppliers, it’s not just about the quality of the product, but also about the quality of the aftersales service; and we’ve found Vawdrey to be really proactive. People say a business is measured on its recovery, and Vawdrey certainly measures up.”

Fast Fact: Australian steel company BlueScope was started in 1915 and is now the third largest manufacturer of painted and coated steel products in the world. Its global network includes over 100 facilities in 17 countries, and the business employs approximately 14,000 people.