With the growing cost of container transport, Norman Carriers sought a solution that would allow it to carry more containers per trip. Since purchasing a new quad super B-double skel combination by Vawdrey, the wharf cartage specialist is achieving major efficiency gains.

Delivered in November 2017 and put straight to work, transporting containers to and from Melbourne’s wharves, the new combination is the first quad quad super B-double to join Norman Carriers’ 75-strong trailer fleet.

“Our fleet allocators love the added flexibility and carrying capacity that the quad quad offers. The capability to carry four 20ft or two 40ft containers is a real game changer for our operations,” says Gareth Hearnden, Managing Director at Norman Carriers.

Operating under a mass-management permit, the quad quad super B-double is achieving a gross vehicle mass of up to 77.5 tonne, up from the 68.5 tonne that is possible on a standard B-double.

“Aside from the obvious efficiency benefits, we love the look of the trailers. Having them finished in our blue company colour has made them really stand out and beautifully fit our corporate image.”

The business has specialised in wharf cartage since the beginning, along with general freight and side-loader deliveries throughout metropolitan Melbourne; however it has now diversified its offering to include a broad range of other services such as warehousing and container storage, as well as a suite of container unpacking and redelivering services.

Gareth says his grandfather laid a strong foundation for the business, creating a culture of hard work and customer-centric behaviour that still exists within the business to this day.

Norman was succeeded by his son Grahame, before passing the reigns of the business onto his son Gareth in 2016. “My father continued to raise the profile of the company within the Melbourne transport industry. His knowledge and experiences have ensured the company would continue on its upward trajectory by enabling our fleet to run efficiently and effectively,” says Gareth. “Since becoming director I have continued to work closely with my father to solidify everything he has built while also using cutting edge technology to push the company forward.

“Being my family’s business, I’ve been involved in one facet or another since birth. I’ve worked my way through the business, from being a truck driver to a forklift operator to a special project coordinator and most things in between.” 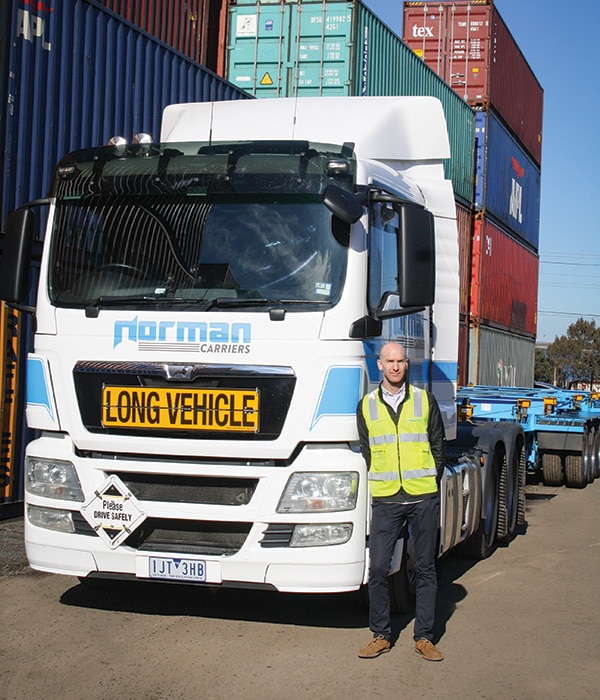 As well as skels, Norman Carriers’ fleet is made up of a range of other specialty equipment including tautliners, side-loaders and drop deck extendables.

Gareth decided to incorporate the latest addition from Vawdrey into the fleet following some research on the sorts of productivity gains that could be achieved through the use of a super B-double. He contacted Vawdrey after seeing an ad for the manufacturer in Trailer Magazine. “Being impressed by their products, I reached out to Vawdrey, which has looked after us ever since,” says Gareth. “The growing cost of transporting containers has made it imperative to be able to carry more containers per vehicle.”

Looking ahead, Gareth says that Norman Carriers is well placed for future growth. “We pride ourselves on being a one-stop transport shop, where no job is impossible. Our flexible planning and large fleet allow us to do last minute jobs where most carriers cannot. We offer a transport service that has all the compliance and convenience of a large corporate carrier while maintaining our family business roots. We want to continue to build a self-sustainable business that will be strong well into the future, solidifying the legacy of my family.”