Transport and logistics provider, Hi-Trans Express, has announced its intention to become carbon-neutral by 2025. Working with long-term and valued partner Vawdrey, the company is showcasing its commitment to this initiative with a new batch of Vawdrey B-doubles featuring ‘green’ graphics on the curtains.

Having been in operation for more than 50 years, Hi-Trans Express is an Adelaide-based independent family-owned company with a national branch network.

In its infancy, the company’s focus was on the provision of a customer-oriented freight service between Adelaide and Broken Hill.

The freight carried to Broken Hill was largely groceries and mining equipment, while back loading was primarily wool.

Today, Hi-Trans Express supports its Australia-wide operations from head office in Adelaide, with branches in Adelaide, Broken Hill, Brisbane, Sydney and Melbourne and agents in Perth, Darwin and Hobart.

Both companies are proud family-owned concerns that strive for innovation and  quality of workmanship in everything they do.

These, according to Hi Trans Express CEO Tony Mellick, are prime reasons why Hi-Trans has standardised on Vawdrey trailers across its operation.

“The innovation and quality of the Vawdrey products are second-to-none and the fact they are Australian made also rates highly with us,” Tony says – adding that his previous experience with an imported brand of trailer prior to working for Hi-Trans left him in no doubt about the truth in the old adage ‘you get what you pay for’. 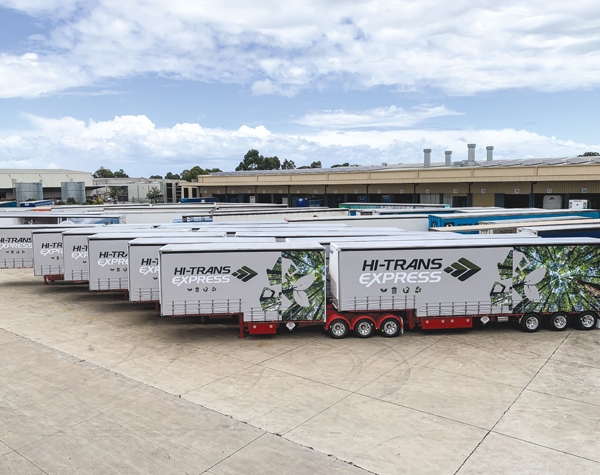 “Yes, they do cost a bit more than some of the others but I know that we will get an extra five or six years out of them which is what really counts in the long run,” Tony says.

Speaking about the latest Vawdrey B-double sets to join the fleet, Tony elaborates on the strategy of continually striving to exceed customer expectations while staying abreast of the latest trends in technology and environmental care.

Thus, he says, the company has committed to becoming carbon-neutral by the middle of this decade and, as part of this commitment, has emblazoned the curtains of the new Vawdrey B-double sets with striking ‘green’ graphics.

“Part of our operational strategy for some time now has been to investigate how we can become carbon-neutral in our company-owned fleet by 2025,” Tony says.

“As a result, we have determined that all our equipment purchases such as prime movers and body trucks will feature Euro 6 exhaust emissions standards, at an absolute minimum, moving forward. Hence, we have chosen Euro 6 Mercedes-Benz prime movers to pull our new Vawdrey B-doubles.

“Dovetailing with this is our strategy for customer engagement and enlightenment, so we decided that the livery on the trailers would pair with the Euro 6 prime movers to provide a firm statement about our commitment to carbon dioxide reduction.”

“We’re currently standardising on Euro 6 compliant trucks and looking towards hydrogen fuel cell power for our linehaul trucks and battery electric for pick-up and delivery (PUD) vehicles where appropriate,” he says – adding that the latter has limiting factors around range and recharging.

Tony also mentions that the disposal or recycling of the lithium-ion batteries must be factored into the carbon-neutral equation.

Talking about the new Vawdrey B-double sets, Tony reiterates they are a visual statement about the company’s commitment to achieving carbon neutrality over the next few years.

“I’ve instructed our people to ensure they are only pulled by our Euro 6 or better prime movers moving forward,” he says. “This is a consistent message we want to portray to our customers and the general public.”

The Vawdrey 34-pallet drop-deck combinations feature height-adjustable mezzanine floors on the lower decks of both lead and tag trailers.

With Work Health and Safety (WH&S) being another high priority at Hi-Trans Express, the trailers are also equipped with the Vawdrey Lift-A-Gate system as well as suspended bungee straps – six on the lead and 11 on the tag – which retract the load binding straps close to the ceiling while loading and are then easily pulled down and tightened. This eliminates the risk of repetitive strain injuries.

As for running gear, the trailers are fitted with BPW axles and air suspension riding on a full complement of alloy wheels.

Completing the picture are the striking curtain graphics applied by Vawdrey Visual which set the scene for the direction Hi-Trans Express is heading with its vision to become carbon-neutral by 2025.

Fast Fact: A family-owned company established in 1969, Hi-Trans Express has acquired  Vawdrey trailers for the last 27 years due to their high levels of product innovation, quality of workmanship and market value.