Although LNG export is a relatively young industry in Australia, the Australia Pacific LNG (APLNG) Project in Queensland has already become a driving force to the region’s economic development. Using Vawdrey equipment, Simon National Carriers is one transport expert capitalising on the new industry.

The APLNG Project is a coal seam gas to liquefied natural gas project supplying commercial markets both locally and overseas. According to APLNG, it will be a source of major investment through to 2020, creating around 6,000 jobs throughout the life of the Project, as well as increasing local skills and boosting the region’s economy.

Next to the 6,000 direct jobs created during the peak construction phase, there is a substantial amount of work indirectly associated with the Project. Simon Project Logistics, a division of Simon National Carriers, for instance, has been chosen to support the construction of key infrastructure – including a 530km main gas transmission pipeline and some 150km of smaller transmission pipelines around Queensland. The main line will begin north of Miles and continue north through Banana Shire before turning east towards an LNG processing plant on Curtis Island, off shore from Gladstone.

“It’s exciting to be part of such a giant project,” says David Simon, Managing Director of the eponymous family-business. “It will create a new, long-term gas processing and export industry in Queensland that could generate significant benefits for the local economy, also in regard to our industry.”

Simon National Carriers have been assigned to transport the predominantly 42-inch (1050mm) high grade steel pipeline, as well as the smaller diameter pipelines, which range in size from 18-inch (450mm) to 36-inch (900mm) in diameter. “It’s a specialist’s job demanding just-in-time delivery, so we cannot afford any unwanted downtime,” says David, revealing that the Project is anticipated to spend approximately $35 billion through to 2020. 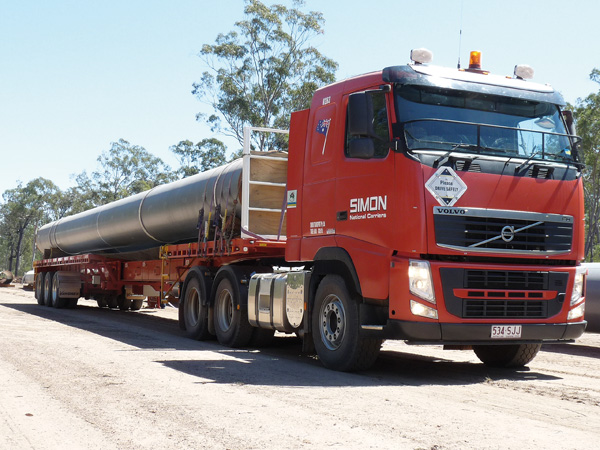 However, timely delivery is only one challenge the Simon team has to face. The combination of rough country roads and heavy freight can be real strain on the equipment in use, so choosing the right gear for the job is just as important as precise scheduling, according to David.

To meet that second challenge, David has asked Victorian-based trailer specialist, Vawdrey, to design an extendable flat top that would not only be able to endure the harsh environment in southeast Queensland, but also ordering diflucan weigh in at the lowest possible weight. Plus, the unit should be flexible enough to be used in a B-double combination once the project is complete.

“Payload is everything in the resources industry,” says David. “If the trailer is too heavy, we would have no choice but to send it back. There is absolutely no margin for extra weight, and Vawdrey has done a great job keeping the design as lightweight as possible. And, most importantly, we can be sure every trailer will be built 100 per cent on spec.”

Despite the strong focus on weight, David is renowned for not compromising on build quality. “Carting a high grade steel pipeline is no easy job, especially when you travel on a dirt road in the middle of nowhere, so reliability is everything – even though you may have to pay the price for it. That’s why we chose BPW’s tried and proven airbag suspension, and will fit all vehicles with EBS going forward.”

So far, Simon National Carriers have taken delivery of 21 lightweight B-doubles built by Vawdrey – including some additional trailers since the project got underway. “There was a point in time when we realised that our existing fleet would not be sufficient, so we got in touch with Vawdrey, who were able to respond promptly. It’s that mixture of flexibility and speed we really appreciate about them,” David adds, emphasizing that Vawdrey’s long-standing expertise proved a great help in choosing the right equipment.

“We know that working in the resource business is a tough job,” says Paul Vawdrey, National Sales Director at Vawdrey Australia. “In the CSG industry, time is worth a lot of money, so you need the best equipment you can get – quite often without any lead time.

“For us at Vawdrey, that means we have to provide a premium product in less time, while continually optimising the design in regard to weight and overall strength. It’s a job only few can master without compromising on quality, and I am proud to say we can.”

According to Paul, the Spring Gully and Fairview fields in the Bowen Basin and the Talinga field in the Surat Basin are world-class in terms of their scale and productivity, “so you need world-class equipment to get the job done. It’s that simple.”