Since Vawdrey first revealed an automatic mezzanine deck in early 2010, the new technology has been turning heads throughout the country. In fact, it spread so fast that not even the Bass Strait could halt its momentum, when SRT Logistics brought the innovative system to Tasmania.

Tasmania has a reputation as a gourmet’s paradise – the state’s cool climate, fresh air, pure water and fertile soil produce a wide variety of fresh produce, making agriculture a buttress of the local economy.

For more than 20 years, SRT Logistics has been capitalising on the island’s flourishing food industry, carting perishable freight to food manufacturing sites, wholesale and retail outlets throughout Tasmania. Based in Hobart, the company also transports freight across to the mainland, delivering refrigerated food and dry goods to a cold storage depot in Melbourne, where it is then distributed to clients all around Victoria. 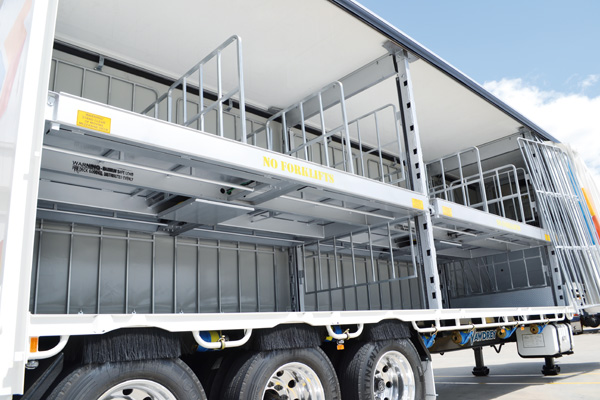 To ensure a premium service that is just as well regarded as the high quality produce they cart, SRT has a capital of more than 200 staff and deploy a fleet of 40 prime movers 20 rigids and 85 trailers.

“We started working with Vawdrey almost 10 years ago with the intention of improving our fleet and increasing productivity,” says Rob Miller, General Manager at SRT Logistics. “Vawdrey stand for the same ideals we have as a company, which is providing a quality, reliable and time-focused service. We felt that by partnering with Vawdrey that their expertise in trailer designs would give us a competitive advantage over the long-term.”

Determined to comply with strict OH&S regulations, Rob consulted Vawdrey’s National Sales Manager, Justin Simmonds. “SRT had specific requirements from maximising cubic space for pallets without comprising the safety of the operator to how the trailers would suit the shipping vessel it would travel on,” Justin says. “After a number of proposals over a six month process, we agreed upon a particular design. But credit to SRT who were willing to embrace new concepts that would benefit their operation.”

“Choosing the new auto deck Vawdrey model was a no-brainer,” says Rob. “Each drop deck semi is 10.5m in length, so it was vital to be able to maximise cubic space on the inside – and Vawdrey is the only company that can offer an OH&S friendly system that is fully automatic. Since they are on the market, they have sold hundreds of these units, which is basically speaking for itself.

“The mezz deck system allows us to basically double the pallet space per trailer, which is key when freighting fresh produce over to Melbourne and bringing back beverages to Tasmania. To be able to carry those two products in one trailer shows how flexible the application is.”

The idea behind Vawdrey’s auto mezzanine solution is simple, but inventive. It allows the operator to raise or lower diflucan buy online every deck individually by using a remote control, without having to climb the load platform and handle it manually. “There is no need for someone to climb onto the platform to relocate the corner saddles whilst a forklift is balancing the deck in mid-air, which is a workplace accident waiting to happen,” Rob says. “Safety is our biggest priority and that is what Vawdrey has addressed in these trailers.” 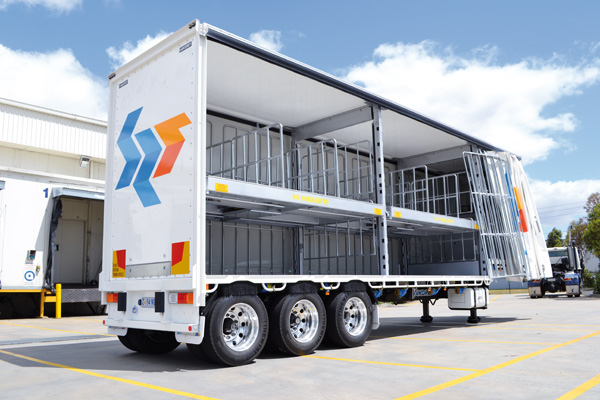 Once the air-operated locking pins are engaged, each deck can carry a load of up to six tonnes. “From a commercial point of view, the Vawdrey system can create an additional seven to eight pallet spaces on top of the conventional 22 pallets, which is a huge upgrade on such a short trailer,” Rob says. “And due to the split deck design, it can still provide maximum flexibility in case the load is larger. That kind of flexibility can also save on shipping cost for the client.

“Another key aspect is that the system is able to reduce the amount time wasted in changing the deck position. Some companies won’t allow you to change the height of the decks on site, so that means that the operator must go back to a depot and change the decks there, then come back and load the new freight. All this equates to about four to five non-productive hours per run. Fortunately, that is no longer an issue with the Vawdrey system.”

“Having developed more than 200 automated decks and putting all of them in circulation, that’s given us the opportunity to gain extensive operator feedback,” Justin adds. “As a result of those evaluations, we’ve been able to further develop and refine the technology, as well as improve our design incorporating some key safety features.”

All four of the new drop deck curtain-siders are currently shuttling between Tasmania and Melbourne. They operate on a six-day weekly schedule, and shipped back and forth over the Bass Strait on a ship. Since the goods have to be refrigerated, each trailer has in-built diesel-electric powered fridge. “Whilst on the road the diesel powers the unit, but once we store the trailers inside the vessel, they are plugged into electric terminals on the ship to keep our shipments cool,” Rob adds.

After a short time in service, Rob says the mezzanine decks are already generating plenty of interest from SRT’s clientele. “SRT Logistics exists in a market where the demand to freight different types of perishable goods is constant. We’ve barely had the drop decks operating a month and already we have taken on additional contracts due to the new system. It turns out some of our clients, by word of mouth, have mentioned the automated mezz deck technology to acquaintances in the industry and they have turned around and approached us with new work.”