There is no standing still in the general freight game, especially when working interstate and for an array of blue chip clients that expect nothing but perfection. To ensure it can stand the pace, Adelaide freight company Wightman Transport is using Vawdrey-built transport equipment.

As a 24/7 freight service covering South Australia, Victoria and New South Wales, Wightman Transport has to take a whole lot of variables into consideration that may affect the on-going success of the business – including traffic, staff health and safety, and even the weather forecast. The company’s transport equipment, however, should be reliable enough to take at least one unknown out of the equation – and to ensure just that, Wightman has tapped the expertise of Melbourne trailer specialist Vawdrey.

“When a multi-million dollar retail business is entrusting you with stocking a branch, you better make sure the shelves are filled before the customers come in the morning,” says Peter Starke, Director at Wightman Transport. “There’s literally no room for error in the retail business.”

As a result, Peter is very selective when ordering new transport equipment. “While we never place a single order, we do have a policy to test a handful of trailers out in the field first before we decide to go ahead. If they convince us, we can talk business.”

At that stage, a Wightman order can include up to ten trailers at once, according to Peter. “When we know a product is up to scratch, we’re backing it if the pricing is alright.”

That mentality is exactly how Peter decided on purchasing 10 new Vawdrey ‘Titeliner’ in B-double configuration. Each B-double is based on a 7.6-metre lead trailer pulling a 13.6-metre B-trailer, with a joint maximum load capacity of up to 34-pallets – 12 in the front and 22 in the rear. 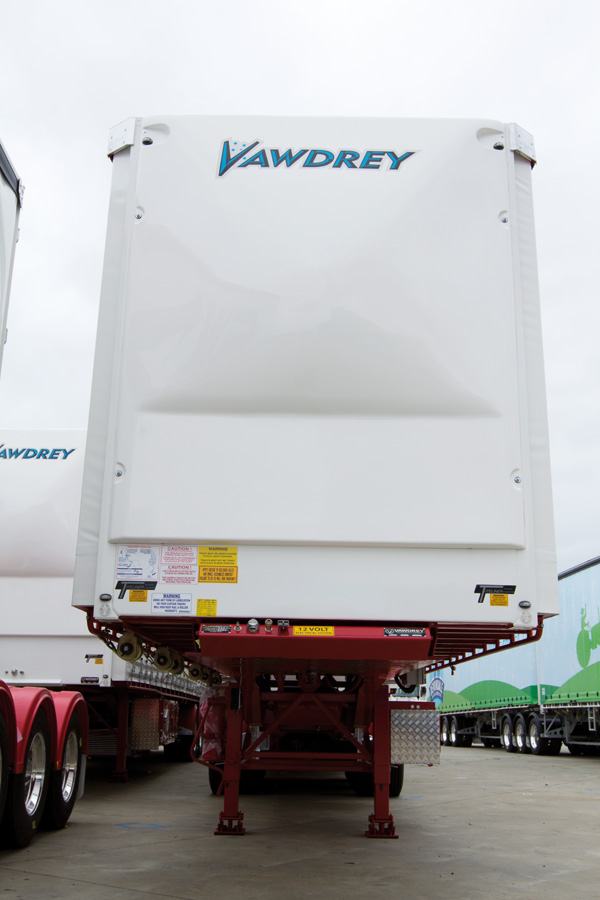 More importantly, however, the A-trailers come with a roll back option. Once they are firmly based on the Jost landing legs Vawdrey recommended, they can be left at a dock for unloading or loading. “The fact that the body can just slide to the back makes work in the retail game a lot more convenient,” Peter says.

But the most effective part of the configuration, according to Peter, is the pneumatic side hinge coaming system that allows for safe rear loading in both trailers. “The system helps immensely when forklift drivers are loading buy diflucan us freight from the rear, and it’s easy to use as it can be operated at the push of a button.”

Load restraint was also a consideration when speccing the armada of custom-built Titeliners, which is why Vawdrey fitted Attard’s load restraint Cable Curtain system. The system is based on solid cables fabricated into the curtains that form a reliable, NTC-rated load restraint. “The cable curtains basically act as standard curtains, but eliminate the need for gates in many instances,” Peter says. “This benefits our drivers greatly since they don’t have to lift heavy gates in and out of the trailers, so it prevents a potential OH&S issue.” By now, seven of the 10 combinations are already in service, and the remaining three are slated for late April.

One of Wightman’s biggest clients include WA public company Westfarmers, owners of renowned retailing giant the Coles Group, whose household labels include supermarket chain Coles, Liquor Land and K-Mart. In fact, Wightman only just took hold of an additional contract for Westfarmers in January, supplying all 11 K-Mart local stores in Adelaide as well as two regional K-Mart outlets in Port Lincoln and Port Pirie, with all deliveries coming out of Melbourne via its B-double Titeliner fleet. Given the company’s requirement to have a fleet primed and ready to go by mid-year, Wightman hit the market in search of a trailer manufacturer who would be equal to the task.

“Wightman is known to only use state-of-the-art equipment, so we knew we had to keep to that mantra even if we were strapped for time. Vawdrey were able to come to the party with the particular designs we needed for rear and side loading curtain-siders, the capacity and the lead times to have it all designed in time,” Peter says, revealing he was thoroughly impressed with the performance and service Vawdrey delivered thus far.

“We started purchasing Vawdrey gear in 2010 because of they are renowned for reliability, service, competitive pricing and generally maintaining good relationships in the market. In fact, ‘brilliant’ and ‘on the money’ are the best terms I can use to sum it all up.”

According to Peter, the new Vawdrey B-doubles will bring Wightman’s fleet to more than 126 trailers –including 60 refrigerated vans, 28 (14-pallet) rigids, as well as 27 prime movers that pull B-double combinations and road trains alike.