2013 has been an action-packed year for the team at Vawdrey Australia. Driven by a strong focus on product innovation, the company not only cemented a leading position in the traditional trailer market, but also expanded in growth areas like PBS. Now the next highlight is about to be unleashed.

Although the nation’s largest privately held trailer manufacturing company owned the headlines in 2013 after passing the historical 30,000th-build milestone and introducing the first-ever Super B-double in Victoria to operate outside the waterfront area, there is no sign of slowing down for Vawdrey Australia.

In fact, the first ground-breaking development of 2014 has already arrived: Expanding its rapidly growing Performance Based Standards (PBS) portfolio, Vawdrey has developed a 26-pallet/20m version of its popular Iceliner model, which is now approved to operate in Victoria, NSW and QLD on all general access routes. 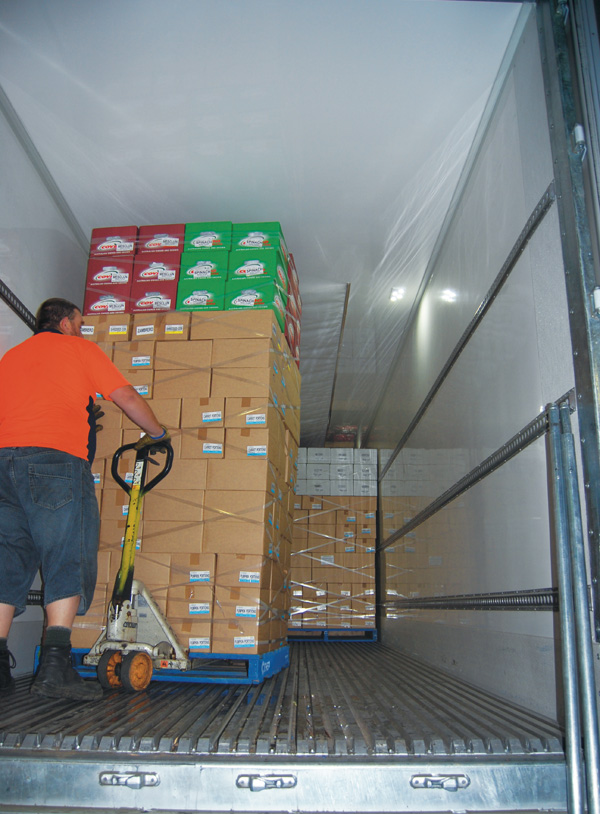 Built on behalf of Gippsland-based family company, Covino Farms, the oversized van is widely recognised as the “next big thing” in the PBS arena. “PBS is not a new development and we’ve been a key player in the area for quite some time, but Vawdrey has never built a PBS-approved freezer van before,” says Vawdrey Sales Consultant, Jim Reeves. “That’s a real game changer right there.”

According to Jim, it is Vawdrey’s philosophy to not just follow the masses, but actively push the boundaries of modern trailer design – the 20m Iceliner being the latest example. “Trailers of this nature demonstrate Vawdrey Australia’s commitment to continuous innovation and show why we are at the forefront of the Higher Productivity Freight Vehicles (HPFV) movement in Victoria.”

Jim explains that the evolution of the PBS scheme into the refrigerated transport market was only a “matter of time”, triggered by Covino Farm’s openness to embrace the all-new concept. 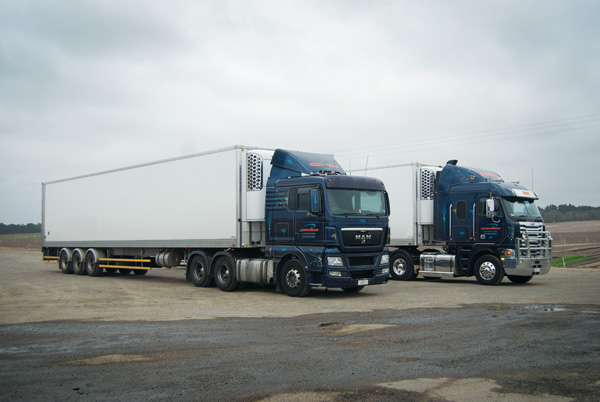 Founded by Ugo and Maria Covino in 1972, Covino Farms is regarded as one of the largest producers of fresh vegetables and salads in Australia and organises the transportation of fresh produce to clients in Victoria, Sydney, Brisbane and Adelaide largely in-house.

Now joined by Ugo and Maria’s children – Peter, Steven and Cathy – the company has ample experience in the transport game and proved to be the perfect partner to explore new high productivity opportunities. Having used Vawdrey’s Titeliner model since 2008, the Covino family was keen to explore the idea of having a purpose-built refrigerated van as opposed to a classic B-double combination when Jim Reeves first brought up the unusual concept.

Steven notes, “In our line of work, it’s all about finding the most ‘flexible’ solution possible. Using a B-double means our drivers may have to detach the B-trailer and leave it behind in a public area, and we want to avoid this inconvenience as much as possible. With just one trailer, we’ll have the flexibility to go anywhere and avoid taking up space, all while transporting more freight than before.”

But it wasn’t just the idea buy diflucan online cheap alone that captivated the Covino family. Vawdrey’s willingness to bring a prototype Iceliner on site, a move spearheaded by Jim, left them equally impressed. “We felt it was in Covino Farm’s best interest to test out the equipment in a real-life scenario first. It’s one thing to send photos, diagrams and have lengthy phone conversations, but to give the client a clear understanding of how the unit will operate, they need to physically see it and run it themselves,” says Jim, who delivered the test trailer to Covino a month before the final decision to purchase two PBS Iceliners was made.

Even though the two 26-pallet vans took some time for approval by key road governing bodies like the National Heavy Vehicle Regulator (NHVR), VicRoads and the Roads and Maritime Services (RMS) agency in NSW; Covino Farms knew the new concept would be the future of their fleet. “The order was placed in September, and both trailers were delivered and in service by December,” Steven recalls. “That is a quick turnaround considering all the requirements the trailers had to meet, but it was well worth the wait and they are currently being used to deliver fresh produce to our valued customers.”

Each tri-axle Iceliner is fitted with a Thermo King SB-330 refrigeration unit that can maintain temperatures as low as -18°C. To protect the stock on board, each Iceliner can boast a solid 120mm Styrofoam insulation on the heavy-duty front walls and roof, combined with 40mm, Styrofoam-insulated sidewalls. The 120mm high-profile aluminium airflow floor is fully insulated too and equipped with a non-slip distribution surface for forklift use inside the van. The design is completed with a fully welded 5mm threshold plate. According to Jim, Vawdrey developed every element in-house.

In addition, both trailers use all the latest in safety technology – including EBS/ABS units, side under-run protection, LED lighting as well as Wabco’s tail guard technology to make reversing safer and more convenient. Both trailers run on super single tyres and feature BPW airbag suspension.

“A lot of these features are standard on our Iceliner range, but some elements like side under-run protection were added to meet the strict PBS guidelines,” says Jim. “The result is outstanding – Covino Farms can now maximise the payload per run without switching to a B-double, having peace of mind that their drivers are operating one of the safest trailers on the road,” Jim says.

With both trailers now in operation, Covino Farms can already see the bottom?line effect PBS will bring to the family business. “The major advantage is added flexibility. Running a single trailer means we occupy less space at our drop off points, keep our costs down and boost our efficiency at the same time. We’re proud to be the recipient of Vawdrey’s first-ever PBS Iceliner; in fact, we are so happy with the trailers that we have just placed an order for two more.”