Vawdrey Australia is taking commercial road transport in Victoria to the next level with the introduction of the first?ever 30m tri-axle A-double PBS combination to operate at the Port of Melbourne. Young transport company, Arrow, will be the first to put the new set into operation.

Wharf cartage has always been a major part of Craig Webster’s life since he entered the industry in the early 2000s, but it took almost 15 years until he started his very own transport business. Alongside his wife Nicole, he is now running one of the most forward-thinking 24-7 container businesses in Melbourne’s bustling wharf precinct.

Having established Arrow in 2011, the Websters know the key to becoming an elite container cartage company will be upping the ante from a productivity standpoint. “We  want Arrow to become a household name and the carrier of choice for all customers in our market segment,” says Craig. “That’s why we constantly look at new ideas and learn about new schemes like PBS that could help us improve. And, we certainly won’t hesitate to make a bold move when we come across something that could take our operation and service to the next level.”

Implementing the first two 30m tri-axle A-double sets in Victoria late last year certainly was one such move, but Craig is quick to deflect the credit back to Vawdrey. “The A-double idea goes back to Vawdrey’s Justin Simmonds, who came to me at the start of 2013 with the idea to maximise payload by carrying two 40-foot containers at once, giving us a distinct advantage around the port as well as servicing customer warehouses around country Victoria.” 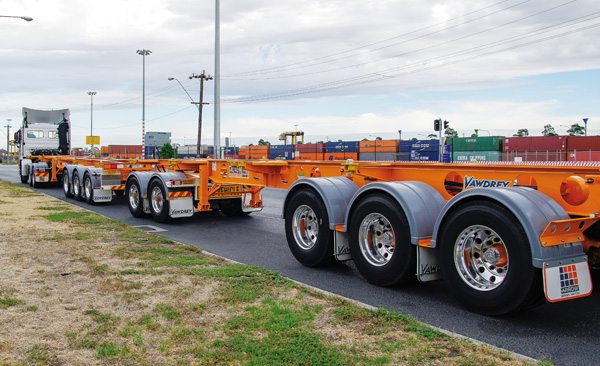 Even though Vawdrey already had the all-new Super B-double as an option – a novelty that was introduced to the Victorian market in August 2013 – an A-double proved more suitable for Arrow’s daily operation. “It wasn’t just about hauling two 40-foot containers, but about being able to access any site and being able to separate the combination. None of that is permitted when using a Super-B, hence why the A-double made more sense to us. Respect to Vawdrey for only taking six months to produce it.”

The quick turnaround time is the result of Vawdrey having the whole unit pre-approved according to the Performance Based Standards (PBS) scheme. “The fact that the unit was pre-approved meant that we could order the entire combination in one lot. Knowing that we didn’t buy diflucan uk have to pass the vehicle through a lengthy process, we even decided to purchase a second A-double on the spot.” According to Craig, each A-double combination is based on a tri-axle dolly connecting two lightweight, tri-axle skels. “That way we can haul up to 68.5 tonnes gross while still being able to navigate freely in and around Melbourne’s ports, outer suburbs and country Victoria.”

According to Vawdrey’s Justin Simmonds, the company used Domex steel to construct the A-doubles’ robust chassis, while fitting Hendrickson’s Intraxx suspension and Wabco EBS for added safety. “The running gear spec was part of the PBS requirements set by VicRoads,” says Justin. “By specifically using these components, Arrow was able to to maximise the payload – and that’s really what these combinations are all about. The flexibility to be able to separate the trailers if needed and use them as singles is an added bonus.”

While the A-double skels have been built to the highest safety and engineering standards, Craig says the reason he has been using Vawdrey since day one is the company’s willingness to understand his operation and help it grow. “One thing that will never change in the transport game is the need to provide good old customer service, and that’s what both Arrow and Vawdrey stand for,” he says. “We are an ambitious business and worked hard for our reputation, but we also know we need to back that up by meeting our customer’s demands. Vawdrey has helped us make that possible.

“The new A-double skels will deliver a 100 per cent productivity gain on each trip. In the long run, that will equate to a huge competitive advantage, and we have to thank Vawdrey for helping us become the first Victorian company to go down that path. Special thanks also to Peter Michell of VicRoads, who worked tirelessly with the National Heavy Vehicle Regulator to have this combination approved in the best interest of all Victorian road users.”

Arrow’s new Vawdrey A-doubles come at a time when the company is on the verge of opening a new purpose-built site due later in 2014, which will be another first in Victoria as it caters specifically to the needs of wharf cartage transport. “We’re growing as a brand every day and keep embracing new technology to provide our clientele with live data and transparency,” Craig says. “There’s no standing still.”