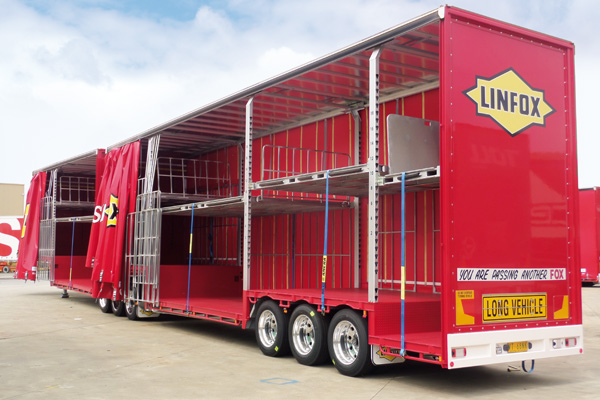 “After the success of our last PBS-approved hi-cube trailer, our customer requested more cubic space for the next model,” says Paul Vawdrey, National Sales Director, Vawdrey Australia. “This triple drop deck will ensure a higher payload, as well as an increase in operational efficiency.”

Said to be one of the most imposing B-double combinations to hit Australian roads under the PBS scheme, it’s only fitting that Vawdrey’s latest model is being rolled out by transport and logistics powerhouse, Linfox. The company is the first to benefit from the new triple drop deck design after taking delivery of several combinations in February.

The ‘triple’ in the product description refers to an extra drop section manufactured at the rear of the B-trailer. “Behind the suspension, we’ve added even more room,” says Paul. “Linfox is using the space to carry extra pallets that can be double-stacked utilising the additional mezzanine deck.”

According to Bernie Dalton, Linfox Fleet Manager, the new combinations will add a whole different dimension to the iconic operation. “Currently, all combinations are in use transporting freight from distributions centres to various locations across Victoria, South Australia, New South Wales and Queensland,” he says.

The new Vawdrey model was also built to accommodate the varying requirements of Linfox’s clientele. “The demands of freight transport are changing all the time,” Bernie says. “This triple drop deck combination enables us to transport higher volumes more efficiently, which is key when you’re working around the clock.”

Inspired by the success of its first PBS hi?cube B-double, Vawdrey’s new triple drop deck can operate at 68.5 tonne buy diflucan canadian pharmacy gross and carry up to 36 pallets – 14 in the lead and 22 in the B-trailer. It can also be double-stacked, allowing for 72 pallets overall. The triple drop deck B-double is also equipped with BPW suspension and axles to minimise axle spacings and comply with Vawdrey’s PBS design approval. In addition, also fitted is Vawdrey’s outer perimeter chassis rail for increased cubic capacity and additional pallet space. Once the freight is on board, it can be secured using the latest in load restraint curtain technology. 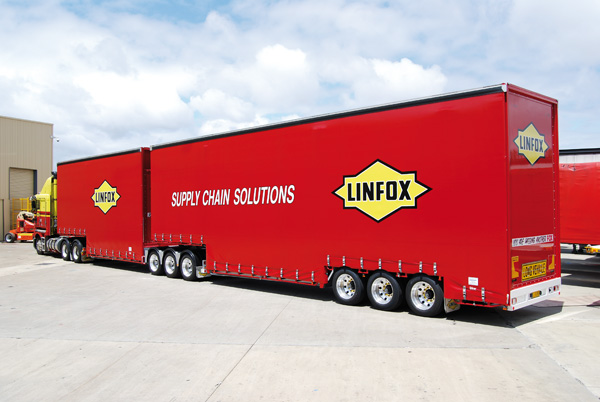 According to Vawdrey, the triple drop deck B-double combinations will generate plenty of buzz amongst large fleet operators such as Linfox. “The bottom line is that this combination was designed to make the daily loading and unloading process faster – and this appeals to many companies in this sector,” Paul says.

While Vawdrey met all expectations for Linfox’s latest order, it was the units that were trialled that ultimately sealed the deal. “Vawdrey was very accommodating right from the start, building us two prototype combinations to see how they would hold up,” recalls Bernie.

“Their engineers came out on site and consulted our drivers, who in turn gave them great first-hand feedback on what parts of the trailers needed adjusting. Those modifications were crucial when building the other combinations.”

As Linfox’s workload increases periodically, the need for transport equipment that is both versatile and product-specific will be key in the years ahead, says Bernie. “In our industry, you’re always looking for an edge to separate yourself from the competition and Vawdrey knows how to do that. It’s why we have continued to do business together for the past few decades.

“These new triple drop deck B-doubles are a big reason why our partnership continues to flourish. Paul Vawdrey and his team know our industry well, what we require and they build us quality trailers that are reliable, innovative and that best suit those specifications. It’s vehicles such as these that put Vawdrey at the forefront of PBS in Australia.”