Running a demanding shuttle schedule between Brisbane and Melbourne, AJM Transport requires its trailing equipment to be backed by a strong support network – one it found with Vawdrey Australia.

Newcastle-based AJM Transport sets itself apart from most standard Australian fleets by offering a shuttle service – an unusual set-up which sees the company running trailers up and down the eastern seaboard to Brisbane and Melbourne. 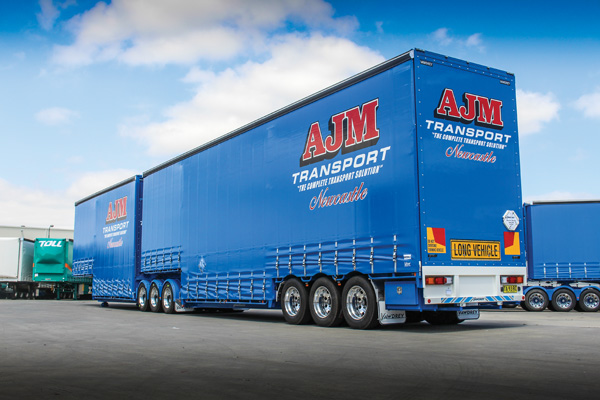 The AJM fleet of nearly 100 trailers that are making the tough treks include 4.3m hi-cubes and several 4.6m hi-cube 36-pallet Performance-Based Standards (PBS) approved combinations recently delivered by Vawdrey Australia. “We’ve been running 36-pallet hi-cube combinations for about a year now, because they have the greatest pallet capacity you can get,” reveals AJM Transport Owner, Anthony Mansell.

The available payload depends on the configuration of the vehicle, Anthony says, as some of his trailers have up to nine mezzanine floors that reduce the overall payload. “Some of the combinations boast a payload between 35 and 36 tonnes. When they run without PBS route approval, you have to take a minimum of 10 per cent off that capacity, sometimes bringing it down to around 24-26 tonnes payload,” says Anthony. “There is a massive difference, but hi-cube trailers also have the cubic capacity, so we’ve got the best of both worlds really.”

In a standard week, Anthony says his prime movers each travel between 10-11,000km, so the window of opportunity for any required servicing is limited. “Our shuttle schedule runs 24 hours for six days and a half day on Sunday, which puts a lot of pressure on workshops, both ours and externally,” he explains – revealing that the backup provided by Vawdrey Australia has been able to work around his schedule to meet his servicing requirements.

“We’re really happy with the support from Vawdrey,” Anthony says. “Of course the trailers are good, but it’s so important for us to know we have that backup support as well. I can pick up the phone and ring Mick Vawdrey or Paul Vawdrey and know that someone cares.”

In saying that, Anthony adds that he rarely needs to lean on the trailer builder for any warranty requirements, but he appreciates how seriously the company takes its service and maintenance responsibilities. “Vawdrey just spent buy diflucan in usa millions of dollars in Brisbane on its new facility, and has shown that it’ll drop everything to jump on a request for us,” he says. “To have the knowledge that we can click our fingers to get something fixed is a real relief.”

Although AJM relies on manufacturers for their own products, with Vawdrey taking care of trailing equipment and Kenworth and Volvo trucks sent back to dealerships, the tight window of available servicing time means AJM tries to keep a lot of maintenance in house. “We’ve invested $3 million over the last 18 months into our own purpose-built facility in Newcastle, complete with warehouse, office space and a fully functional workshop to make it possible to work around our shuttle schedule.”

AJM started the shuttle service six or seven years ago, and the business has grown around the distinctive point of difference. “Sometimes people get off the path and end up outside the realms of what they can do, so I made a business decision to stick to what we do best, which is linehaul overnight express,” says Anthony. “A lot of what we do is the linehaul services for some of our major customers, where we supply our own trucks and trailers and cart freight between their branches in Melbourne and Brisbane.

“We can offer a 22 hour straight through service, which makes us stand out from the competition. What many other companies would consider to be express is our standard practice.”

Anthony explains that he has always tried to make AJM Transport stand out from the crowd with both its business model and the presentation of its vehicles.  “We’ve always tried to be different than the Joe Average, and hopefully that reflects though the whole business,” he says. “Our big blue trailers are part of our branding and marketing strategy. They stand out, especially with the red logo against the blue on the trailers.”

Across the hard working AJM Transport fleet, Anthony counts 50 Vawdrey trailers including the latest hi-cube PBS combinations, making up more than half of the total of 97.

“We’re expecting to hit 100 this year, and we’ll likely be commissioning Vawdrey for the trailers to meet that milestone as it keeps working with us and our support requirements.”