With five new hi-cubic curtain-siders from Vawdrey Australia, ATT Logistics believes it has the foundation to grow its Melbourne operation.

Reciprocal relationships in the business world are powerful, such as the ongoing partnership between Brisbane-based ATT Logistics and Victorian trailer builder, Vawdrey Australia. When Garry Clarke, Director of ATT Logistics, discovered Vawdrey’s curtain-sider 20 years ago, he did so at a time when the trailer builder was still a growing entity in the Sunshine State. In the years since, Vawdrey has not only made its mark by establishing a Queensland facility, but also sites in all major cities across Australia.

Today, the roles are somewhat reversed, with Garry looking to establish the ATT brand in Melbourne  – Vawdrey’s home base. Opened at the start of March 2017, ATT’s new site in Heatherton, a suburb 20km southeast of Melbourne’s CBD, means the company now has a legitimate footprint in a market it has long coveted.

“Melbourne is an important location for us and the new Heatherton branch will complement our new packaging contract, which covers 11 local depots,” says Garry. “This facility lifts our capacity and highlights the growth we’re experiencing outside of Queensland.” 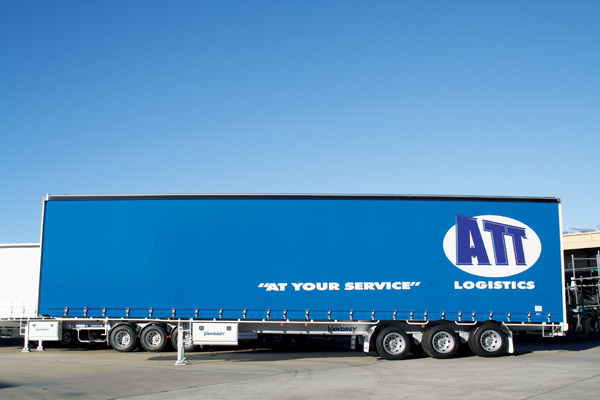 ATT’s Melbourne foray will be bolstered by the latest purchase of five new curtain-siders from Vawdrey, which are all currently in service.

“It’s come together beautifully. Vawdrey not only built all the trailers by February this year, which was well ahead of schedule, but all five were ready to be picked up even before we opened in Heatherton,” Garry says.

“Its office is also just 20 minutes from us, so that’s an extra luxury should we have any issues or require additional equipment in a short time.”

According to ATT, the five tri-axle ‘Titeliners’ are built on a wedge chassis, enabling ATT to maximise cubic capacity across the 4.5m high trailer.

“We were looking for a high volume unit with a low centre of gravity and this design allows us to carry 24 pallets in total, slightly more volume than our older curtain-sider models,” Garry describes.

“In addition, since the majority of the freight is lightweight packaging, the trailer’s high aperture allows us the option of double stacking the pallets if needed, which is a major payload advantage. This diflucan online pharmacy makes the trailers valuable assets over the long haul.”

Each Vawdrey Titeliner is also fitted with its load restraint-rated curtain system, coloured in the company’s trademark blue with ATT’s logo emblazoned across the sides and rear of the trailers.

“A huge focus, particularly in the early stages of our Melbourne expansion, will be on promoting the ATT brand, and the best way to achieve that is through big, bold, sign-written vehicles that are be hard to miss on the roads,” Garry says.

“It’s proven successful when we started in Queensland as most of our business was won from customers seeing our brand everywhere.”

The new hi-cubic trailers not only have the potential to make ATT’s Melbourne branch a profitable venture, but also fit in with the company’s policy of ‘leaving no assets sitting around’.

“Unless we need to run maintenance or service on the trailers, we have them on the road at all times making profits,” explains Garry.

“In fact, you won’t find any vehicles parked in our yard. We don’t buy our own trucks either. Instead, we employ fleet owners to do the work. The idea is that any driver can simply drive their truck, pick up the trailer and go to work. By using fleet owners and not owning the prime mover asset, we keep our gearing ratio down.”

Garry continues, “I’d say 80 per cent of our work, including the Melbourne job, are all on contracted deals. That’s our business model. It’s why every trailer we purchase is either a curtain-sider or flat top, so once the contract has finished then we can move those trailers on to the next, which are always within the food and beverage or packaging industry.”

The five new Vawdrey Titeliners bring the ATT Logistics fleet to a total of 94 trailers, with some in B-double configurations, mostly built by Vawdrey. It’s a trend that ATT won’t change any time soon.

“We’d certainly like to think we’ve contributed to helping promote the Vawdrey brand in Queensland and now it has a strong presence there,” Garry says.

“Once we made the decision to expand into Melbourne, it made perfect sense to stick with Vawdrey to build the local fleet and continue leveraging that partnership.”