When it comes to its trailer fleet, Hannah’s Haulage believes consistency and brand loyalty go a long way. Its strong partnership with trailer builder, Vawdrey Australia, is helping the business continue to grow from strength to strength.

Director and founder of Hannah’s Haulage, Scott Hannah, started his business with a single truck in 2000. In the beginning, he built his company up off the back of a single contract, but when his one major client went bust, he came close to losing everything. “It was good while it lasted,” he says. “But I was stuck in one industry and then it shut down, so there was no work left for me. Now I’ve diversified. The key to success is being versatile. I’ve had the experience of having all my eggs in one basket, but I don’t do that any more. I now have incoming work from different areas to ensure it keeps us going.” 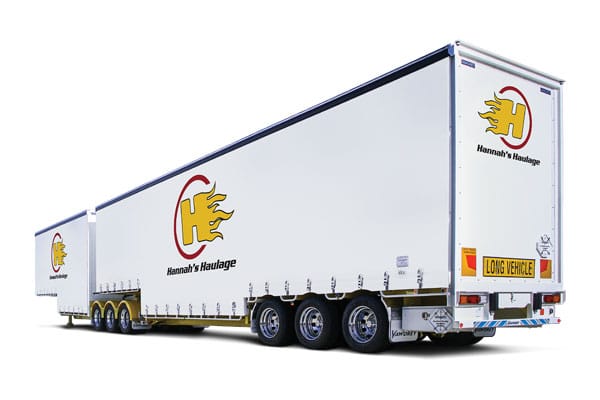 Scott persevered through the tough times and pretty much started from scratch in 2010. He had kept some of his trucks and semi trailers, and a few drivers. For a while, his business was operating out of his home, and he was still driving too, but he says there were many people in the industry who were willing to help.

Scott made the decision to split his business into four divisions: warehousing, construction, local work and interstate linehaul. He found work where he could, including specialised freight such as carrying stormwater pipes, and Hannah’s Haulage came back bigger and better than ever before, growing at a rapid rate. Today, the business has a turnover of roughly $15 million per year.

Scott explains that diversification was something that happened over time. “After our downturn, I found whatever work I could get. I learnt a lot from that experience. I’m a mechanic by trade and have worked as a driver, so when it comes to building specialised equipment, I have that knowledge because of the work I’ve done in the past. It also means I can train my drivers too, and we take on work that is a bit more specialised, which some operators may not want to touch. If I say I can do it, it gets done properly. If I can’t do it, I won’t take it on.”

The company’s fleet now features over 40 trailers and 34 prime movers. The majority of the modern trailer fleet has been built by Vawdrey, with two brand new 56 pallet drop deck B-doubles with mezzanine floors just added into the mix.

Scott’s strong focus on versatility doesn’t only apply to his operations, but extends to his trailer equipment. “The trailers have been designed to be pretty versatile. If we need to, we can remove the posts inside and take out the mezzanine deck to suit whatever it is we need to carry. If a customer needs specific type of trailer, I’ll build it to suit, but these new B-doubles can really carry anything – that’s why they’ve been built this way,” explains Scott.

Though extremely versatile, the new B-doubles are also highly customised too. Vawdrey worked closely with Scott to develop a solution that would accommodate his clients’ various transport needs. For example, as they are equipped with sliding posts, these can be moved out of the way when the trailers need to be used to carry stormwater pipes; and by including load restraint curtains, they can be used to service a supermarket contract carting plastic bottles.

Vawdrey has also incorporated stronger gates, tool boxes, water tanks and BPW disc brakes. For driver comfort, a generator has been fitted to both of the A trailers, which can be used to power up things like cooking gear and the air conditioner while the driver sleeps.

Along with the two latest B-double combinations, Vawdrey also supplied another B-double drop deck in late July to service a contract transporting express freight. “The client wanted to maximise space inside the trailer, so we gain about 300mm in height in the middle section. We can still fit the same amount of pallets, but it means they can be higher,” adds Scott.

When purchasing big-ticket items such as trailers, he says that aftermarket service and support is just as important as product quality. “And I think that’s something that sets Vawdrey apart. They are always very accommodating. There was a time I needed parts in Brisbane after hours, so Vawdrey National Sales Director, Paul Vawdrey, asked the state manager to open the shop up and bring them out to where we were. Nothing is ever a problem, and if something needs repairs, they’ll go out of their way to fix it.”

Scott says that Vawdrey’s ability to think outside of the box is another key advantage. “At Vawdrey, the quality control is just better, and the design is a little different too. Vawdrey trailers are a quality build – they aren’t the lightest or the cheapest, but I think that’s the key, there is never any compromise on quality.”