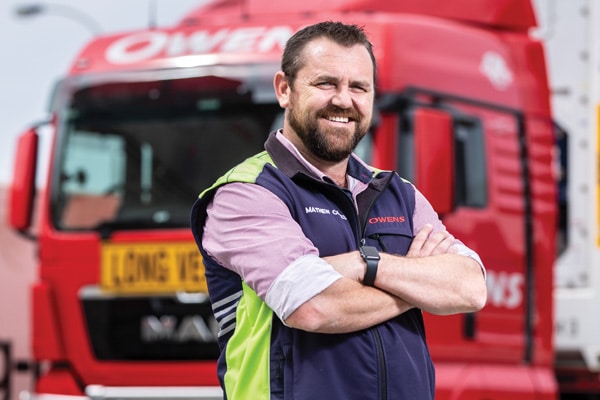 With a national fleet of over 300 trailers and 160 trucks, Owens Transport is a major player in the supply chain logistics business. Started in 1953, it operates branches across Australia and New Zealand and has a company network that spans through Asia, Europe, North America and South America.

Owens’ trailer fleet includes a wide range of equipment to cater to a wide range of tasks, including skels, side loaders, flat tops and retractables – many of which have been built by Vawdrey.

The Victorian trailer fleet, now 72-strong, welcomed its first two Performance-Based Standards (PBS) approved quad quad super B-doubles in May 2018. Impressed by the high payloads and unique capabilities of these trailer combinations, a third identical set was received less than 12 months later. A further three Vawdrey PBS-approved quad quad super B-doubles are also in use in the Queensland fleet.

The super B-doubles are used to transport containers from the Port of Melbourne and Owens’ Altona facility to its customers, travelling through the High Productivity Freight Vehicle (HPFV) road network at up to 77.5 tonne Gross Combination Mass (GCM). The combinations can also be used on other road networks at up to 68 tonne GCM.

As Melbourne Branch Manager for Owens Transport, Mathew Coles says, “We’re carting more with less. Compared to a standard B-double, we are getting up to an extra 15 tonne. It means we can be more competitive in the marketplace because we are using less vehicles to cart more containers. Instead of having to send two trucks to the Port of Melbourne or to Altona to pick up two 40 ft containers, we only need to send one.”

He adds that the increased capabilities of the super B-doubles are also helping to free up other existing resources, providing the ability to further grow the business while still using its current pool of trucks and trailers.

Vawdrey completed the PBS-certification process on behalf of Owens, and according to Mathew, the entire process was seamless. For Owens, the ability to operate higher productivity vehicles under the PBS scheme has delivered great results. “PBS has had a huge impact on our operations. It’s definitely helped to keep the truck count in our fleet down, and given us greater scope to get more containers to and from the port in a shorter timeframe. We used to run seven trucks at night, now we’ve been able to drop that down to four,” Mathew reveals.

“Because the industry is pushing so heavily to get more into 40 ft containers, being able to cart two of these at a time is an absolute blessing,” he says, revealing he has also been impressed by the strong, yet lightweight construction of the trailers. “These trailers have been terrific. They are reliable, strong, durable, and most importantly, are lightweight, which gives us the ability to get more payload. We previously used a quad quad super B-double from another manufacturer, but the Vawdrey ones are two tonne lighter overall, which makes a huge difference.”

Key to the strong, yet light construction of the trailers is the use of lightweight, high-tensile Domex steel. The super B-doubles are complete with Hendrickson Intraax suspension, self-steering axles to the rear of each suspension group, Wabco EBS, aluminium hubs, aluminium wheels and low-profile tyres.

“The super B-doubles are impeccable. They look amazing and are very durable. They would have around 30 containers coming on and off them every day and they are holding up really well. Vawdrey is such a reputable manufacturer which manufactures locally and offers tremendous support for their product,” adds Mathew.

“The aftersales service from Vawdrey is terrific. Quite often they’ll call to check if everything is okay and come out to see us to inform us about new trailers being designed. Vawdrey really tries to understand our business and looks at how it can make our business better. I think that’s quite unique to Vawdrey – its approach towards our business is outstanding.”

Looking ahead, Owens has more orders on the way from Vawdrey, with four retractable A-doubles, which will be operating under PBS, due to join the Melbourne fleet by early June.

Owens also has plans to expand its operations in the near future. It currently operates two sites from Melbourne, but a strong focus on customer service has paved the way for continued growth, with the company set to open a third Melbourne facility by late 2020.