Doug Painter, TLS Director, says the company has depots in Melbourne (Tottenham and Dandenong), Sydney, Brisbane and recently expanded with a new site in Newcastle. This growth was necessary to thrive during the Covid-19 pandemic.

“2020 was extremely tough for TLS with the long closures of Victoria,” he says. “With a large portion of our business supporting major retailers we were hit extremely hard in Melbourne with little to no retailers being open. Port issues in New South Wales caused logistical hurdles for our major Sydney based customer where we were unpacking up to 10 containers a day in our Dandenong depot and sending back to our Sydney depot for storage.”

In the past 12 months TLS have been working with Pet Circle, a 100 per cent online pet store. 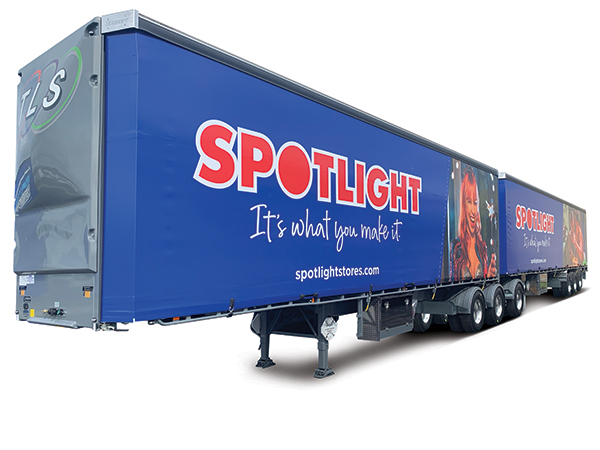 “Their continued growth has been incredible especially during 2020,” Doug says. “We are proud to support and help promote their business with two of our new 36-pallet Vawdrey Titeliners emblazoned with their livery.”

Spotlight and Anaconda also joined the TLS customer base at the beginning of 2020, and to celebrate their support, Doug arranged for some of his 42-pallet Vawdrey trailers to flaunt their branding on the curtain livery.

TLS has managed to persevere through tough times by leveraging its partnership with key suppliers such as Vawdrey.

“We have had a partnership with Vawdrey now since 2001,” Doug says. “Over the past 20 years, a personal relationship with both Mick and Paul has grown. I have always been happy to embrace new technology and ideas with the best trailer builders in the country.”

“The fleet also includes B-doubles which are 4.6m high, with a volume of 210 cubic metres, and are rated for a capacity of up to 42 pallets on the floor plus a load on top of the mezzanine decks,” Doug says. “The mezzanine decks ensure our heavy vehicle drivers are operating as efficiently and as safely as possible while loading and unloading.”

“The most important features of the trailers that we specify from Vawdrey are Performance-Based Standards (PBS), cubic capacity, safety and reliability which means less linehaul movement and greater savings on fuel,” Doug says. “As a business, TLS is committed to providing retail customers with the most innovative transport solutions while being mindful of our carbon footprint. Our partnership with Vawdrey has led TLS to running an efficient fleet by running fewer trucks and more productive trailers fitted with the latest PBS technologies.”

Vawdrey Australia specialises in the design and construction of PBS trailing equipment and has bolstered the transport capabilities of businesses to maximise payload gains as well as improve vehicle operator safety with its innovative Auto Lock Deck and LatchLiner buckle-less curtain systems.

“Every time our clients see a new set of trailers with Vawdrey livery – the smiles we see on their faces are priceless,” Doug says. “Most customers we have think Vawdrey are the only trailer manufacturer in Australia as this is all they have ever seen from TLS. Vawdrey are the best, and with more than 20 years of partnership that will never change.”

Fast Fact: Since Total Logistic Solutions commenced operations in 1997, Director, Doug Painter, has committed to a longstanding partnership with Paul Vawdrey. “I exclusively run Vawdrey trailers because the team at Vawdrey are proactive when it comes to Performance-Based Standards (PBS) and finding smarter ways to operate,” Doug says. “Vawdrey is a driving influence for keeping pace with the times and also staying focused on how to compete in the near future.”